I’m putting together an eight piece set of entryway/hallway/foyer furniture:  bench, end table, coffee table, two arm chairs, two hall trees, and a floor lamp.  Our plan is to exhibit the entire set during the Madison County Fair, this August in our home town of Twin Bridges, Montana.  The exhibit hall at the Fairgrounds, called “The Pavilion”, is an impressive octagonal log building.  And, I still imagine how good, and appropriate, the set would look on exhibit in the lobby of Old Faithful Inn in Yellowstone Park.

The bench, two arm chairs, one of the hall trees, and the floor lamp have already been documented in this blog.  I’m now in the finishing stages of making the end table, coffee table, and second hall tree.  I probably won’t photograph the entire set until it is on display at the Fair, unless some of the pieces sell at the Ennis Arts Festival, which happens earlier in August, before the County Fair.

Over the next six weeks or so, I’ll update and revise this post.  For now, here are some photos taken in our greenhouse workshop.  I’ll add notes or captions as time allows.

I also want to share that this blog just passed the 10,000 views mark.  That doesn’t compare with the volume of Youtube video or Twitter posts that go viral, but it impresses me nonetheless!

The base of the hall tree is made from a section of a lodgepole pine tree trunk located at ground level when the tree was standing. 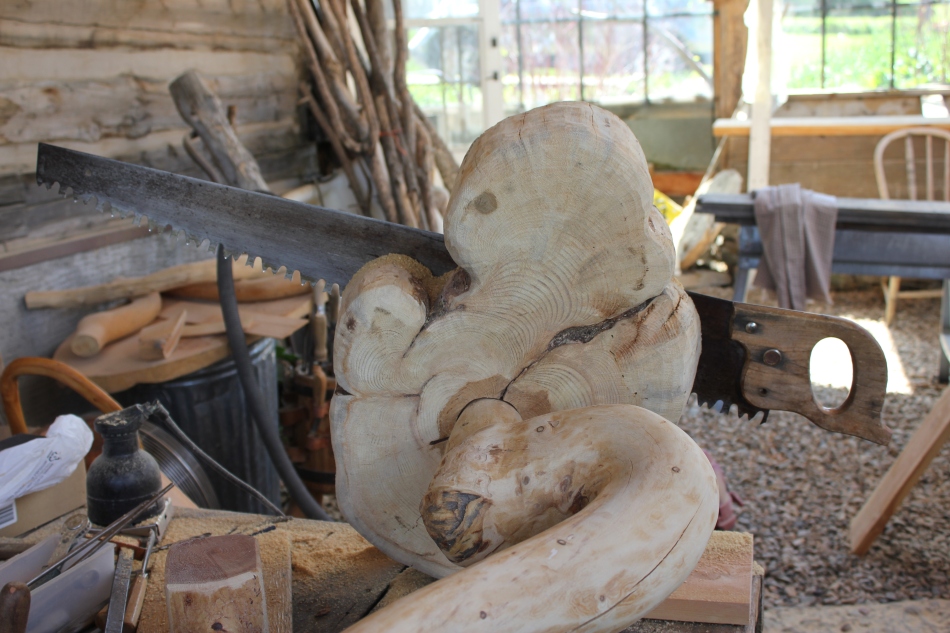 Cross cutting the base with a one-man logger’s saw, cutting to a level line that was scribed off the floor while the hall tree was standing upright.

The thin, tapered slice alongside. I had to remove the 8″ lag screw and rout a new countersink hole.

A side view showing the thinness of the removed piece and the flatness of the hall tree base. It was a tedious sawing job, but I couldn’t think of a better, less risky, way to do it.

Here’s the end table. Its top matches the hall tree base. I began making this piece almost 20 years ago. Its post is an incredibly contorted lodgepole pine tree trunk. The base is a granite stone. I will soon photograph the underside of the table top with its diagonal forked supports and inlaid steel bar.

At this stage, I’ve inserted the five forked hanger pegs in the hall tree, using round mortise and tenon joinery, glued and reinforced with concealed wood screws.

Here’s another view of the end table that better shows the contortions of the tree trunk post. Also, notice the tool caddy in the background.

The ends of the two tree trunk posts were shaped into cylindrical tenons joined to matching mortises in the table top. The joints were reinforced with hardwood dowels. For added table top support, I drilled holes into the two posts as mortises and shaped the ends of two forked pieces to serve as diagonal braces. The forks were glued, inserted into the posts, and screwed to the table top.

The first work I did on the underside of the table top was to inlay and screw down a flat piece of 1/4″ steel, to strengthen the top in the case someone lifts the whole piece by the top.